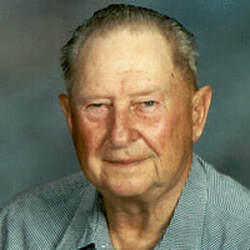 Mervin Gerhardt Tonn was born on August 4, 1925, in Ceresco Township, Blue Earth County, to Frederick and Lydia (Wester) Tonn. He was baptized and confirmed at St. John’s Lutheran Church in Willow Creek, and attended St. John’s Lutheran School through the 8th grade, during which time he honed his excellent handwriting skills. He continued to be very supportive of Christian education throughout his life.  Mervin married Violet Lillian Urban on October 3, 1976, in Eagan. The couple lived on the farm that Mervin so pridefully cared for until his death.

He was a farmer all his life, raising both crops and cattle. Mervin loved fishing, the outdoors, and working in the woods to keep his property neat. He enjoyed jigsaw puzzles, especially when completing them with Violet. Mervin adored his grandchildren and nieces and nephews, as well as the greats that came along later in life. Mervin held many offices at St. John’s Lutheran Church.  For the past 20 years since Violet’s death, Mervin enjoyed breakfast at Linda’s Place in Amboy, and Friday nights at The Happy Chef.