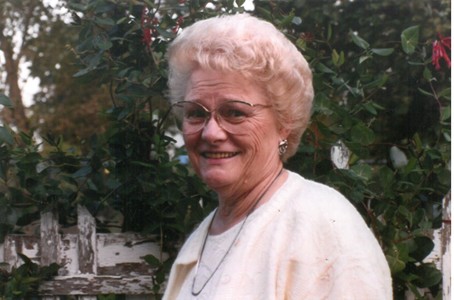 “Back in the day” life was much different than now. Many of the things we take for granted today did not exist for the younger generation growing into adulthood in the 1930’s. Coming from a farming family, Esther Kosbab learned early the difference between wants and needs.
Esther was the second oldest in a family of six children and the eldest daughter. Much of her time as a teen was spent helping her parents. She longed for the opportunity to attend school and study past the eighth grade. When she was older, on occasion, she would reminisce about her youth. Then her usual smiling face would show the disappointment she felt as she explained how fortunate her younger siblings were to have the opportunity to attend high school.
As a young woman, she was busy raising her own family of four. Esther and her husband Bill lived and farmed just three miles from what is now Martin Luther High School, Northrop.
The basics Esther learned and took with her into adulthood were quite amazing. When the need arose, she began working as a bookkeeper at the Northrop Creamery, a job she was proud of and where she thrived. Esther liked working with numbers, but she also did very well with the English language. When her children needed assistance with their school studies, she was always willing to provide support.
Esther was a member at St. James Lutheran Church in Northrop. It was with great pride that she would assist at Martin Luther High School’s rummage sales and other fundraisers for the school. One year she graciously opened her home decorated for the Christmas holidays for the MLHS Tour of Homes to raise funds for Student Tuition Aid. Even though she never saw her dream of earning a high school diploma come true, that never stopped her from working to ensure it would become a reality for others less fortunate.
When Esther went to her heavenly home, Esther’s children were given the opportunity to honor their mother by setting up the Esther Smith Mohwinkel (nee Kosbab) Student Tuition Aid Endowment Fund which is special fund within the Martin Luther High School Endowment Fund. The principal is invested with and managed by the Lutheran Church-Missouri Synod Foundation in St. Louis, MO. This scholarship fund emphasized two of the most important aspects in Esther’s life: religion and education. Esther would be honored to know she has helped students to pursue their Christian education goals at Martin Luther High School.
Esther's family continues to make gifts to this fund. It has grown to $50,000. Each July income disbursements are distributed as scholarships to qualifying families. Esther's legacy lives on to make it possible for teens to daily hear the message “Jesus Christ loves you and is with you.”
​God bless the memory of Esther Mohwinkel. ​