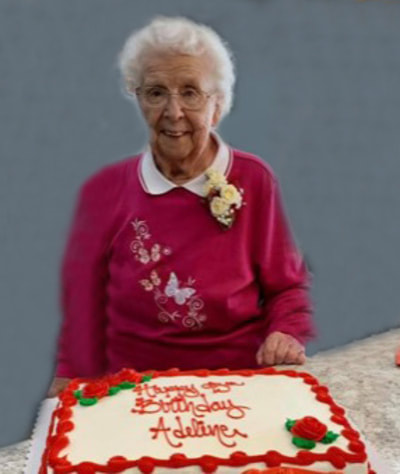 Adeline was united in marriage to Delmar Riebel on October 25, 1945, at St. John’s Evangelical Lutheran Church in Sleepy Eye, MN.  This union was blessed with three daughters, Eunice, Ronda, and Julie.

Adeline and Delmar moved to Fairmont in 1955.  They later moved to Pleasant Prairie Township, rural Granada, MN, in 1959, where they farmed and lived in retirement for the next forty-six years.  Many winters were spent in Tucson, AZ.  During her free time, Adeline loved playing cards.  Adeline and Delmar shared sixty years together before Delmar passed away on December 19, 2005, which was his mother’s birthday.

Along with her parents, Fred and Alice Lendt, Adeline was preceded in death by her husband, Delmar Riebel; daughter, Ronda Carr; sisters, Rachel Willmann, and Arleta Portner; and brother, Harvey Lendt.

Adeline left a living legacy gift to Martin Luther High School through an investment with Edward D. Jones. Because Adeline loved music and drama, her gift of $28,000.00 was invested with the Lutheran Church-Missouri Synod Foundation and established the Adeline Reibel Fine Arts Endowment Fund. Each year the interest from this gift will go to help fund the Fine Arts Programs at MLHS.