what is a parent's most important job?
​ 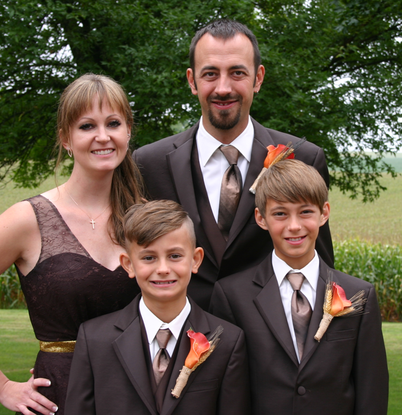 Jennifer Luhman (MLHS 2003) her husband, Jordan (MLHS 2003), with sons, Jackson and Wyatt.
My grandmother recently gave me a book called Gospel Reset, by Ken Ham. After reading it, I felt compelled to write about the importance of Christian education, from my perspective.
Before I started attending parochial school, I attended a public elementary school. During these public school years, I attended church and Sunday school every Sunday and my mother read devotions with us almost every night. I think it is fair to say that I was raised in a devout Christian home and given the typical educational resources to nurture and sustain my faith. One day I brought home a book from school. This book was a child’s version of the New World Translation of the Holy Scriptures, aka the Jehovah’s Witness Bible, given to me by a friend. I believe I read this book without my parent’s knowledge for about a week before they found out and had me return the book to my friend. This is just one example of how susceptible young people are to conformity, appeasement, misdirection, peer influence, etc, and despite my typical Christian upbringing, my salvation could have been jeopardized.
The main focus of Ken Ham’s book is reaching the younger generations and making the Bible relevant to them. As I read this, I found myself feeling like an “inadequate Christian” for my lack of active ministry. While there are always opportunities to educate or invite community members, I find that it is for the most part, inopportune. However, within this focus Ham also emphasizes the importance of proper education, which is the means of building a solid foundation. This includes going to God’s word for truth and recognizing His truth as absolute--- not to be compromised by new age thought and political correctness. In other words, unchanging.
After thinking hard about how I could do my part, I realized something. I am responsible for the up-bringing and spiritual welfare of my two boys, and in consequence, maybe the generations thereafter. That’s significant! My most important job is to make sure my sons grow up knowing Jesus Christ’s promise of salvation and to ensure they are provided with the tools to protect their faith, not just now, but throughout their entire life. That is why Christian education is so important. Sunday school is not enough. Our youth need constant interaction with God’s Word and a thorough understanding of how to apply it and defend it. They need guidance on recognizing falsehoods and maintaining the truth.
Ken Ham states that 90-95% of church-going youth attend public schools where they are taught anti-Christian beliefs as fact (evolution, big bang, million years, etc..), and a majority of them fail to recognize actual sin. So the fear is no longer as improbable as bringing home a friend’s book of false doctrine.
Anti-Christian beliefs are being taught in nearly every corner of the public school system; a system where Christ is not welcome. But there is hope. Christian education can be your defense. The strongest ministry we can do might just be right here, starting with our youth. And everyone can help, whether through enrollment in, financial aid for, or promotion of our local Christian schools.
In closing, while success and achievement are important (and you will certainly find that at Martin Luther as well), they are not the most important thing. The most important thing is and always will be Christ. You may have heard the saying, “If you don’t teach your children the right way, the world will teach them the wrong way.” Well it’s absolutely true. Our society is desensitizing us to sin and our ability to recognize it. I often joke that my sons’ teachers help raise my children. But it is not a joke; it is fact. They help keep Christ the center of their life when my husband and I are absent, ensuring a strong foundation in Jesus. A foundation that will last a lifetime.
Therefore, I urge you, please let Christian education be the curb that keeps your child on track during these pivotal structuring ages.

jason & melissa engel believe MLHS is "a choice worth making!"

Zayne Engel (center front) signed with Bethany Lutheran College his senior year. He is pictured with Coach Borkenhagen, AD Tom Taylor, his sister, parents and brother in the back.
When becoming a parent there is no handbook, there’s no reset button if you make a mistake, and there’s no way of knowing what the future holds for your children. All we can do is learn as we go and put our children in the best possible environment to succeed. Sometimes this road is long and bumpy, sometimes it’s short and smooth, but it always raises challenges and the opportunity for growth.
For our family joining the Martin Luther community was the best choice we ever made. Our oldest child was a sophomore when we transferred him to MLHS.  Let me ask you if you see these signs in your child…. He was struggling both personally and academically. Not because he wasn’t a good student but because he’d become a number in a classroom and was lost in a sea of faces. He believed he was doing the best he could do and that he was not capable of doing better. His attitude towards school was that of complete distaste. He had given up any goals of getting into college and was starting to act out because “it was what it was.” He’d given up and his self-esteem was nonexistent.
As parents we began to fear he would not even make it to his high school graduation much less any hopes of him attending college. We were heartbroken and left feeling like we had failed him somehow. What could we have done differently? Where did we go wrong? Why was he feeling the way he was feeling? How could we change his outlook and get him the help he needed to rebuild his goals for the future?
That’s when we made the only choice worth making…...we transferred him to MHLS the last quarter of his sophomore year! We only wish we would have done it earlier! The changes in him were almost immediate. He couldn’t wrap his mind around the fact that the teachers talked to him one on one, and that if he had questions or didn’t understand something they went over and above to help him. They made time for him before school, after school and during study hall. He was way behind in his studies, but they reassured him he would get caught up to his new classmates and that he was doing an excellent job. For the first time in a long time he began to believe. Believe in himself, believe in those around him, and most importantly believe in a future worth fighting for. It wasn’t easy. He had to work hard, but he was finally in an environment designed for success. We were never prouder than the day he walked across that stage and excepted his diploma on graduation day. The tears flowed freely as Principal Paul Steinhaus smiled and said three little words that summed things up perfectly….“We did it!”
They say it takes a village to raise a child, but the truth is it takes a strong family. At Martin Luther your child isn’t a number. They aren’t looked past or given up on. They are embraced and nurtured, encouraged and pushed to be the best person they can be. They are taught no dream is too big and no obstacle too challenging. They are taught to be proud and successful in everything they do. They are loved for who they are, flaws and all. What better environment could you ask for when your child is there day after day, month after month, and year after year as they grow? What better choice could you make?
We are proud to say our son is in college now on a scholarship. He’s doing great and excelling! He went from having barely a 2.0 GPA his sophomore year of high school to a 3.4 GPA in college. We can honestly say, without a doubt, that his path would have been totally different had we not taken a leap of faith and transferred him to Martin Luther. When it came time for our daughter to start high school there was no doubt she would attend MLHS. She is now in her junior year. She plays volleyball, softball and is involved in the stage crew for the play. She’s already thinking about where she will attend college and embracing her future opportunities with excitement. We couldn’t be happier with our choice to become a part of the Martin Luther family and highly recommend taking the time to evaluate the benefits for your family to join as well. It’s never too early or too late! Our children are too important! Martin Luther is, without a doubt, A Choice Worth Making!!!!